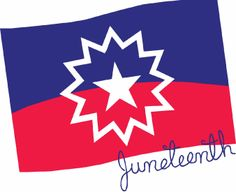 Juneteenth flag. According to CRW flags, the star represents A NEW FREEDOM, A NEW PEOPLE, A NEW STAR. The red, white, and blue colors communicate that the American Slaves, and their descendants were all Americans.[/caption]

Although Abraham Lincoln signed the Emancipation Proclamation in September 1862, many Black people were still slaves. So on June 19, 1865, at least 250,000 Black people who were in slavery did not know they were free. Juneteenth marks the commemoration of when the news was delivered.

It’s amazing that in 2017 we still must fight to have a federal holiday that recognizes that Black people were not free for the first Fourth of July.

Frederick Douglass said it best when he was asked to speak at a Fourth of July celebration on July 5, 1852 in Rochester, New York to commemorate American independence.

“But such is not the state of the case. I say it with a sad sense of the disparity between us. I am not included within the pale of this glorious anniversary! Your high independence only reveals the immeasurable distance between us. The blessings in which you, this day, rejoice, are not enjoyed in common.-The rich inheritance of justice, liberty, prosperity and independence, bequeathed by your fathers, is shared by you, not by me. The sunlight that brought light and healing to you, has brought stripes and death to me. This Fourth July is yours, not mine. You may rejoice, I must mourn. To drag a man in fetters into the grand illuminated temple of liberty, and call upon him to join you in joyous anthems, were inhuman mockery and sacrilegious irony. Do you mean, citizens, to mock me, by asking me to speak to-day? If so, there is a parallel to your conduct. And let me warn you that it is dangerous to copy the example of a nation whose crimes, towering up to heaven, were thrown down by the breath of the Almighty, burying that nation in irrevocable ruin! I can to-day take up the plaintive lament of a peeled and woe-smitten people!”

So let’s celebrate Juneteenth and use this day to appreciate the hard battles Black people endured over the years. While there is much left to do, the country can start by making sure this is a fully recognized holiday as a symbolic understanding that freedom has never meant the same thing for Black people in America.