I Met God and She's Black

As a Black person, it’s hard to find diverse leading roles for Black people in Hollywood. And as audiences become more diverse, all diverse audiences will need to see themselves represented on the silver screen. Recent events demonstrate that when directors finally place people of color at the forefront of films, this inclusion outrages individuals looking to maintain the status quo of less diverse representation in film. But diversity of role-casting is important.

In case you missed it, Academy Award-winning actress Octavia Spencer will play “God” in the film adaptation of the Christian novel “The Shack.” For anyone acquainted with her work, they probably shouted, “That’s great!” at the announcement. But some clergy have publicly shamed DeYoung for casting a Black woman as God. For example, a white male clergy is calling Spencer’s role as the deity, “dangerous and false.” 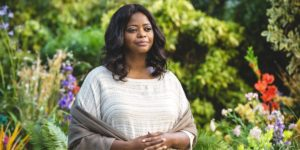 Let’s be honest, the backlash in this casting decision is rooted in white supremacy and misogyny. Not only will the All-Mighty be played by a Black woman, but an Asian woman acts as the Holy Spirit in the film. The choice of a dark-skinned Black woman playing God, despite a history of colorism in movies, is an opportunity to showcase the multi-colored beauty in Black skin. Octavia Spencer has played many roles, from a maid in the segregated South to a scientist working for NASA. She’s been awarded for her acting skills several times. So, what is the problem with her playing God? Given Hollywood’s known history for allowing White supremacy and misogyny to lead role-casting decisions, we have to push for more people of color to be placed into diverse leading roles.

Diversity of films must also include diversity in the portrayals of people of color. Issa Rae’s “Insecure,” is a groundbreaking show for HBO because it is the first show on their network written and directed by a Black woman. The story lines are centered on Black, college-educated young people, which is not a normal story line for HBO and definitely not Hollywood. Donald Glover’s “Atlanta” illustrates how black people could get forced into boxes based on societal norms for certain individuals. And Michaela Coel’s “Chewing Gum” is a show that gives us a look at quirky Black Briton navigating family and love.

If Black actors can play all these roles, why is the portrayal of God by a Black woman so far-fetched? Any time Black people are cast in roles where implicit bias and white supremacy lead people to believe only white people can portray the role, hate surfaces. This is why it is so important to have diversity in film. It’s not just about the movie or TV show, it’s about normalizing people of color in roles that demonstrate we can be whoever and whatever we want to be. Octavia Spencer is not the first Black actor to play God (Morgan Freeman was excellent in Bruce Almighty), but hopefully this will be the last time a Black actor playing a religious figure generates this much of a negative response among a vocal minority.