“Isn’t that Kind of Racist? aka “Why Do Y’all Need a Black One?”

Bert Williams. This may be a name that you don’t’ know but he was one of several popular actors of vaudeville. He performed in blackface, and was also Black. Blackface originated in the late 1820s after a white man named Thomas "Daddy" Rice brought the theatrical style to the stage following his encounter with a runaway slave that performed for him. Blackface, which required white actors to use burnt cork or shoe polish to darken their skin, bug their eyes, and draw on huge red lips, was an incredibly popular art form. It also contributed to decades of racist stereotypes about African Americans, suggesting that they were sub-human, lazy, mistrustful, and several other characteristics that plague the community today. Rather than accurately depicting life for enslaved African Americans as harsh and brutal, it showed characters laughing and singing as a bunch of ill-mannered buffoons. 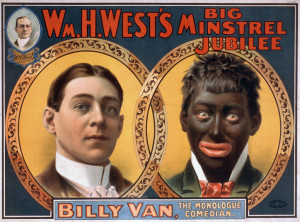 For white audiences unfamiliar with the harsh realities of the antebellum South, blackface would serve as their only exposure, working to perpetuate this "art form" as the life many actually lived.  Due to the discrimination black actors faced, blackface became essentially the only way Black actors could perform in vaudeville shows. In fact, black actors were often booed when they did not wear blackface. For actors like Bert Williams, portraying racist characters like the “Zip Coon” were their only opportunity to find work in this entertainments arena. Although relegated to this art form, the work of Williams, George Walker and others did open the door for more African Americans to gain notoriety and to be able to perform without donning blackface.  Additionally, it gave rise to some iconic black actors including William "Bojangles" Robinson. 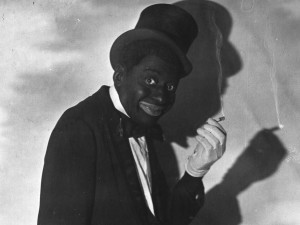 However, the impact blackface left on Hollywood would then be felt in the decades following its end. Movies like “Birth of a Nation,” “Gone with the Wind,” and the “Sambo” series continued to reinforce these stereotypes.

It wasn't until the blaxploitation era in Hollywood did Black actors and Black characters begin to be the lead. These films gave way to future films that included more of our story and more of Black actors. With directors like Spike Lee and John Singleton films depicting the grittiness of life in Black America, Black audiences started to see more of themselves on the screen.  All-Black remakes of movies like “Steel Magnolias,” “The Wiz” (which is a remake of The Wizard of Oz"), and the all-black remake of “Cat on a Hot Tin Roof,” allow African Americans to feel a part of the story of cinema.

However, in 2015 we are still met with the nagging question, "Why do you need a Black version of something?" This question will always be troubling for those who know the story of blackface and minstrel shows. Black actors have often been limited to stereotypes including “the Mammy,” “the Dancer,” “the Grifter,” and “the Buffoon.” Black renditions of films are an opportunity for African Americans to see how they would've done something. It shows the story from the often unheard Black perspective. 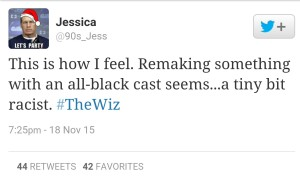 NBC recently broadcast a live version of the Wiz which was watched by 11.5 million people. Despite a positive reception, there was still a significant twitter backlash, calling the play racist. #WeStillCantBreathe exists because any attempt to add color to a whitewashed history is met with resistance. #WeStillCantBreathe is a recognition that underserved communities continue to suffer under stereotypes and under majority-America's desire to pigeonhole and define who and what we should be.

TREE brings to light the issues in the entertainment industry that support racist stereotypes that work to rewrite history, misrepresent our stories, and malign people of color. Stephanie Mills was an excellent Dorothy. Judy Garland was an excellent Dorothy. There is inherently no issue  in having both of actors play Dorothy; the issue lies in the fact that we have to have two. That's why #WeStillCantBreathe.

This blog is part of TREE’s #westillcantbreathe campaign, which uplifts stories about the intersectionality of TREE’s three core issues areas (Entertainment and race, Environmental justice and, Economic justice).  For more information about sharing your story, please email communications@restoringempowerment.